Meet the Great mural of the History of Cusco

With a dimension of 50 meters long and 6 meters high, this mural was considered the largest mural in Latin America in its inauguration more than 26 years ago (it was completed on June 22, 1992), today it no longer enjoys of that award, however, this mural remains one of the largest on the continent .; Located in the heart of the imperial city, this mural is located in the 9th block of Avenida el Sol, a few meters from the most important temple of the entire Inca, the "Qoriqancha". 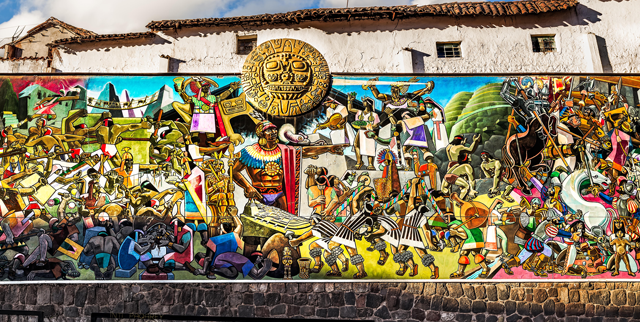 This mural was made by the plastic artist Cusqueño Juan Bravo Vizcarra, where he summarizes in this canvas 3 thousand years of history, depicting in it the 5 stages of Cusqueña history, the origins of the Incas, the Inca Empire, the Spanish conquest , rebellion and modernity.

A Bravo Vizcarra would have cost about 9 months to complete this great work until the day of its inauguration in 1992, at present this mural is one of the most important didactic attractions of the Imperial City; located just two meters above the path, this painting is part of the so-called "Walking tour" within the city of Cusco, and for its realization it had to get acrylic paintings from Mexico as narrated by the late author Juan Bravo Vizcarra. On January 23, 2016 at 98 years of age

Origins of the Incas

Called as the first part of this great mural, in this section you can see the origins of the Incas, according to the Inca worldview, are the snowy peaks, hills, lagoons and the same land also known as Pacha Mama are supreme entities life givers and they are even attributed the origin of the creation of man, here you can also see the first tribes that populated Cusco, these first Andean men are those who carve simple stone objects, paint camelids and hunt vicunas not yet domestic, They can also represent the first ethnic groups of the region such as the Sawasiras, the Antasaya and the Wallas, which started to domesticate animals and grow their own vegetables like oca, quinoa and dominated fire, metals and stones, this part of the mural concludes with the representation of the Legend of the Ayar Brothers, myth that ends with the foundation of the city of Cusco at the hands of Manco Capac, who can be seen Ceding to the original tribes and founding what will be the great empire of the Cusco. 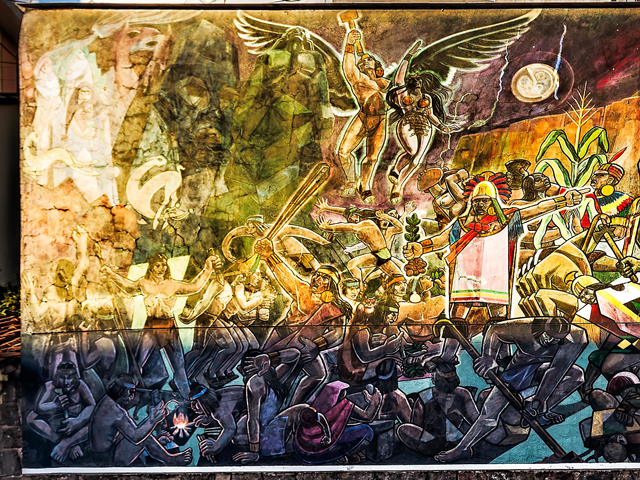 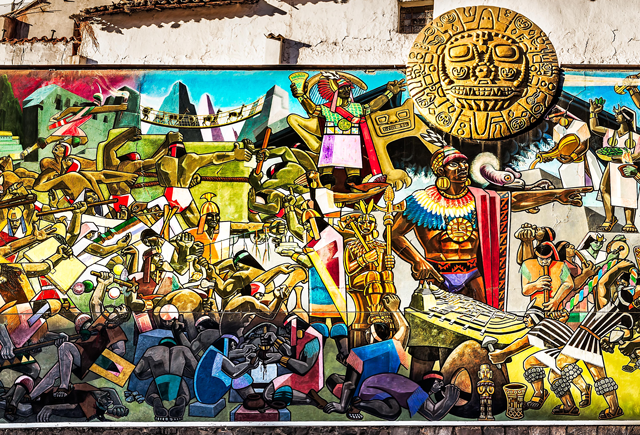 This third part of the mural represents the Spanish conquest and fall of the Inca Empire. You can see in the graphic a warrior half horse and human mita causing death to the Incas which defended with their stone weapons, also appreciates a Spanish soldier stealing a sculpture of a gold flame and another raping an Andean woman, you can see an Inca warrior fighting against a Spaniard in the Inca fortress of Sacsayhuaman, raising one the Tawantinsuyo flag and the other a Spanish crown, finally you can see the fall of the Inca empire and the subsequent indigenous exploitation by Europeans , the cultural subjection, the tortures made at the hands of the Holy Inquisition, and the massacres among Indians under the imposition of Spanish arms. 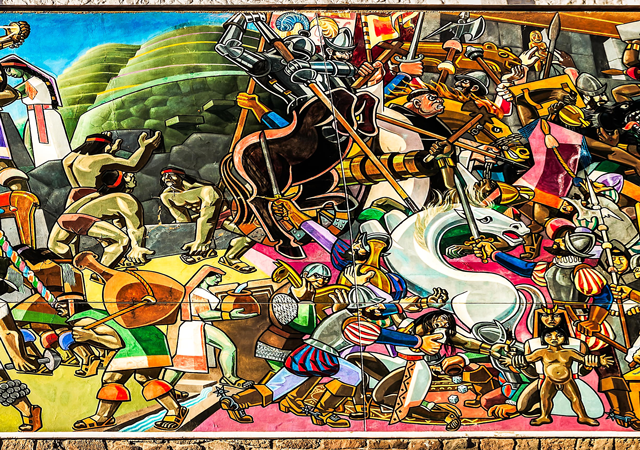 The fourth part of the mural illustrates the entire process that the ex-incanato had to undergo until it became what we now know as the Republic of Peru. In this part you can see the submission of the precursor José Gabriel Condorcanqui known as Túpac Amaru II, this character is seen being tortured by four minotaurs, which pull each of its extremities, this part is important, because according to the author these four animals represent the four most important entities of the viceroyalty (the church, the crown, the military and landlords), in this part you can also see a woman crowning the hero for prosperity, a rainbow crosses the scene to make way for the hope and independence of Peru, finally you can see the general Don José de San Martin declaring the independence of Peru together with the Cusquenian hero Agustín Gamarra. 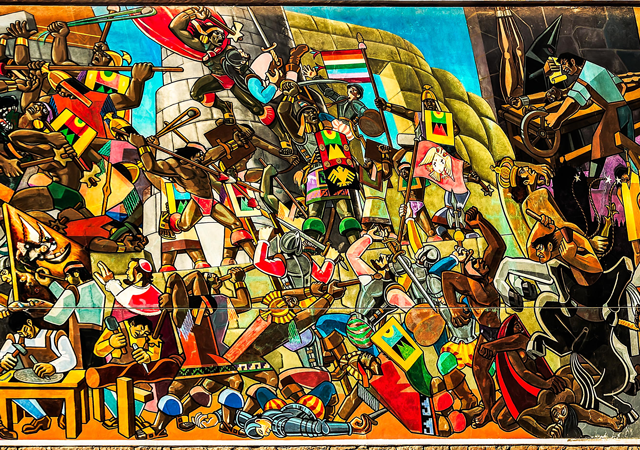 In this last part you can see the industrial development of Cusco and independent, you can see people cutting the wool of a sheep, who are a symbol of a promising future, like the rainbow that is drawn and that are lost on the horizon, Some children play in a circle holding hands under a group of adult personnel who gleefully greet the future, you can also see a character with Inca features emerge with his bare chest up towards the end of the mural, according to the author this figure represents the Inkari, Andean belief that revalues the Inca culture, which will be reborn to return to exercise power and justice in the Andes 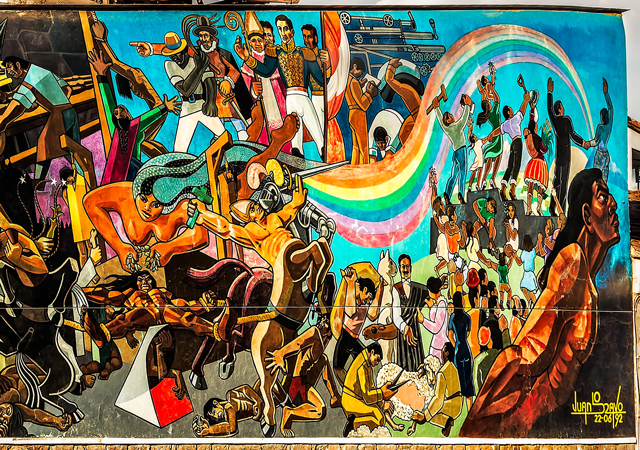