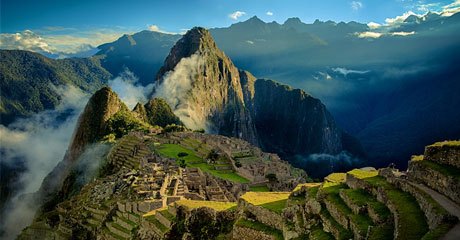 Important - By (January-April) rainy season companies Inka Rail and Peru Rail services depart and arrive to Ollantaytambo or Pachar stations (to 2 hours from the city of Cusco).
-The price of our Tours include transfers to these stations.

PRICE PER PERSON IN DOUBLE ACCOMMODATION - 2019:


PRICE PER PERSON IN SIMPLE ACCOMMODATION - 2019:


PRICE PER PERSON IN TRIPLE ACCOMMODATION - 2019:

We will begin our tour through the modern residential districts of Miraflores and San Isidro. We will visit the financial center, the Golf, El Olivar, the Huaca Pucllana (the pre-Inca ceremonial temple in the shape of a pyramid) and the Love Park on the Malecón de Miraflores. Continuing with our tour, we will go to the Historical Center of Lima, we will know the Plaza San Martin, its balconies and old houses, the Plaza Mayor with its most important buildings and finally we will enter one of the most important convents of the seventeenth century. A complete tour with the comfort and attention of a modern tourist service. (Photo: Lima main square)

You must be in the airport of Lima at least two hours before your flight leaves to Cusco,you only have to approach to the airline counter and display your ID's to check in ,the flight to Cusco lasts 1 hr and 10 minutes, In Cusco " The Archaeological Capital of America ", Our staff will be waiting for you to take you to the Hotel, where you will drink coca tea then you can rest for a while .around 13:00 hrs We'll pick you up from your Hotel to start visiting the following attractives with a professional guide :

The Koricancha Palace and Convent of Santo Domingo: Religious center known as "The Temple of the Sun" where you will admire the impressive engineering used in its construction

Sacsayhuaman: Built at 3 Km. From the city of Cusco, impressive stone fortress with an excellent architecture, Famous for its huge carved stones some of which are at 9m/30 feet high,with a weigh of 350 tons. Here is where the Inty Raymi or Fiesta del Sol is held in June Every year.

Qenqo: Ceremonial and ritual center, amphitheatre where sacrifices were made.

Tambomachay: At 7 Km. From the city of Cusco, ceremonial center of cult to the water,known traditionally as the place where water rests.

From 5:45 to 6:00 hrs., we pick you up from your Hotel in Cusco (3400 mosl) and drive you to the Train Station, located in Poroy, then we get aboard the train and the trip from Cusco starts heading to Aguas Calientes (2000 mosl). Our Guide Will be waiting there , he will lead us to the bus station, to go up by a zigzag way for 30 minutes to reach the world wide marvel The Sanctuary of Machupicchu, known as the lost city of the Incas. Once we get to Machu Picchu, We'll pass throught the control, where we'll hand in our entrance tickets and where our guided tour will start, visiting the main square, the Circular tower, the sacred solar watch, the royal rooms, the temple of the three windows and the cementeries, it lasts around two hours.

In the afternoon, between 15:30 hrs and 17:00 hrs we'll return on train to Cusco, we'll be waiting for you at the train station and then we'll take you back to your hotel.

Fourth Day: Tour to the Sacred Valley of the Inkas

This tour starts around 8:00 hrs., we pick you up from your Hotel, we have a guided tour to the Sacred Valley of the Incas, over the Vilcanota river, with a panoramic view of Pisac an old Inca City and a visit to the Inka market in this village, where we will have the chance to know in a closer way its people customs and get good bargains with the handycrafts and souvenirs sellers, afterwards we'll head for Urubamba, traveling on the borders of the river Vilcanota.

We'll have lunch at a restaurant in the Sacred Valley of the Incas. In the afternoon we visit the fortress and citadel of Ollantaytambo, built to watch the entrance to this part of the valley and protect it from the jungle habitants invasions. We'll have the chance to walk by the narrow streets and have a clear knowledge of how this militar, religious and cultural center was during the Inca empire.

On the way back to Cusco we will stop by the colorful village of Chinchero , where we will find the ruins of the Tupac Inca Yupanqui Royal House, we will appreciate its well preserve Inca wall in the man square and you will visit the beauty Colonial Temple with invaluable portraits, built over Inca Bases. Then we return to Cusco.

fifth Day: flight from Cusco to Lima and Bus to Nazca

Trip by Plane from Cusco to Lima and trip on bus to Nazca After you have breakfast in the hotel and once we`re ready we will head to Cusco's Airport (1 hour from Cusco to Lima). Our staff in lima will be waiting for you at the airport in Lima to transfer to the tourism bus terminal from Lima to Nazca (6 and a half hours aproximately), once arrival in Nazca our staff will be waiting for you to drive you to the hotel.

Sixth day: On flight to the "Nazca Lines"

In the morning, having breakfast, we will transfer you to the Nazca aerodrome, prior to the flight, we will receive an informative talk for a 30-minute flight over the Pampas de Nazca, where the ancient pre-Incas drew gigantic figures of animals and plants. an end not yet discovered, many believe that these figures were made by extraterrestrials, the most outstanding figures are: the monkey, the spider, the hummingbird, etc. In the afternoon we will take a bus to Paracas, a city 3 hours from Nazca, in Paracas we will spend the night. (Photo: Hummingbird of the Nazca Lines).

After having our breakfast, we will move to the port of Paracas, where we will start the tour to the Ballestas Islands passing through "El Candelabro" a giant image on the side of a hill. When you arrive at the Ballestas Islands, you will visit the different islands for two hours, observing the different species of sea lions, seals, penguins and guano birds. After arriving at the port we will make the tour to the Paracas reserve. In the afternoon we will go to Paracas from where we will take the bus to Lima. Upon arrival in Lima, we will wait for you at the bus terminal and transfer you to the airport to make your flight arrangements to your country, there we will say goodbye. (Photo: Ballestas Islands in Paracas).

The day of your arrival we will welcome them at the airport in Cusco and transfer to hotel to start providing the services of tour package so it is very important to send us the following details of flight arrival:

Send your payment by:

1.- Payments with credit card by PayPal

IMPORTANT: In order to send your payment you need to create an account in Paypal

It can be done at any bank, make the deposit with the following information:

Afterwards send us a mail with the following information :

We will send a mail confirming the transaction and we will re-confirm your reserve as well.

If you need more information: